MERRY CHRISTMAS, ONE AND ALL

Is there a word that carries more memories, hopes, faith, sadness, tradition, family bonding, and dreams than Christmas? It's a mixture of spiritual and secular, a day observed by both the religious and the profane. It's a time of giving and receiving. And for many it is also a time for quiet reflection and establishing new priorities.


My childhood Christmases didn't include a lot of expensive gifts, though there was usually a new doll and a Christmas dress--even if the dress was made from flour sacks. The toe of one of my hated long, brown socks always held an orange, a few pieces of hard candy, a chocolate, and a handful of nuts. My siblings and I bought each other gifts at Kings or Woolworths.  Daddy read the Christmas story from St. Luke to us and Mama roasted a goose.


As young parents, the Santa thing became important.  Money was tight and we did our best to give our small children a few of their wishes.  One Christmas we received a foster child four days before Christmas and struggled to buy him a few gifts.  The day before Christmas our mailman, recognizing that an envelope addressed to us held a check, called to have us meet him and pick up our mail at the beginning of his route instead of waiting until the afternoon when he would reach our house.  He made it possible for us to give our foster child comparable gifts to those already purchased for our own child. The lights at Temple Square, The Nutcracker performance, Christmas books, our children's choir and band performances, a soldier son far away at Christmas, Sub for Santa escapades, and various parties became part of our memories


As our children grew up, we spent Christmas Eves with my husband's family and exchanged family gifts that night, and since my own family always exchanged family gifts on Christmas Eve as well, we continued the tradition as our children began their young families.  How I love seeing my grandchildren perform the nativity pageant each year and share their musical talents, enjoy the pot luck style dinner my adult children and I put together for that special night, and treasure the laughter and fun as family gifts are exchanged. Each year I take a picture of all of my grandchildren sitting on the stairs in their new pajamas. Some have decided they are too old for the pajama part now, but we still do the picture. 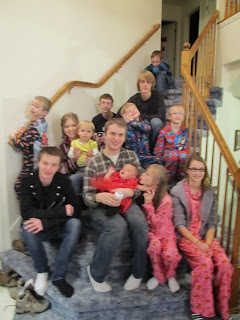 Along with the warm memories of Christmases past, each year I feel excited for the coming Christmas.  I look forward to all Christmas is to me; an affirmation of my faith, the love of family, and a brief glimpse of a world where giving is front and center.  I believe each Christmas season should include at least one anonymous gift.  Those who pay off a stranger's lay-away bill, randomly distribute gift cards, carry out a sub for Santa or Angel tree project, drop coins in a Salvation Army bucket, donate food to a food bank, pay a stranger's library fine, give their waitress a big tip, or merely have a kind word and a smile for a fellow human being understand the spirit of Christmas.  I believe we observe Christmas best when we show the kind of love and kindness Christ practiced, but received little of in return.
Posted by Jennie at 9:18 PM