Correcting errors, pointing out weaknesses, stating my opinions!  I'm not sure if this is a tendency of years of editing, my role as a critic, if I can blame it on a Type A personality, or what, but I have a tendency to notice flaws and I can't help wanting to do something about them. Editors and school teachers use red pencils to make corrections.  Sometimes I wish making all kinds of corrections could be that easy.


As I read social media posts, I groan at the abundance of incomprehensible sentences, misspelled words, and the incorrect usage or omission of words, even though I know a good share of the blame for the problem can be placed on spell checker or simply trying to type as fast as the writer thinks. With the sudden emergence of e-books and independent publishing on the world, the error rate has gone up in the books I read.  I wonder if a certain amount of the blame might also go to our schools for not spending as much time on educational basics as they once did.  Itty bitty keyboards can claim some of the blame too!  Where's my red pencil!


I'm a news junkie and I've always been keenly interested in politics.  Today's politics provide plenty of disgust and annoyance whether you lean right or left.  Mistakes, errors, and downright incompetence and dishonesty abound.  Most of the time I'm glad I'm no longer an editor or reporter, but sometimes I get an urge to write what I think, then I remind myself we, the people, voted for these people because a) we were too lazy to get informed, b)we've confused government with fairy godmothers, or c)we're gullible and actually believed their campaign rhetoric.  I also blame today's news organizations since most belong to wealthy individuals who are more interested in their bottom line than real journalism. And what's with posting a cute story about a sweet little kitty on the front page and informing the world of the atrocities being committed by ISIS on an inside page?  I need gallons of red ink!


This world is full of things I can find fault with; big uncovered bellies that hang over the tops of skirts or pants, people who think they know more than God, texting drivers, Federal ownership of most of the Western states, dresses that are too short on both ends, neighbors who don't water or mow their lawns, yapping dogs, boys' pants that sag below their underwear (if they bother to wear any), the price of gasoline, unvaccinated people, the lack of rights for Islamic women, people who believe rules are for other people, playing the race card, cancer, the cost of prescription drugs, atheist bigots, wasted tax dollars . . .  It's going to take more than a dozen red pencils!


This world is full of problems, big and small.  Perhaps my impatience with some of these problems can be attributed to the fact I'm getting older, but I think I've always been aware mistakes, errors, weaknesses, and dishonesty can be readily found.  They're everywhere.  Some bother me more than others.  I remember asking my dad once why God allows bad things to happen and why some people seem to have worse problems than others.  He said he didn't know all the reasons, but he believed some were so we'd have something to work on while we're here.  This life is like school he explained; you can't get an A for just sitting in class or for not bothering to show up for class.  Assignments are given and homework has to be done. He also said some people aren't tempted by things some other people are because they've already passed those items off before they got here and don't need to prove themselves again.  It was his belief that we weren't all given the same talents and abilities because like at any good school, we aren't all taking the same classes. He assured me that in the end it all evens out. He left me a firm believer in doing my best to pass the tests that come my way, change what I can if it needs changing,  and that it's a good thing that God's the one who wields the red pencil.


Posted by Jennie at 9:41 PM No comments: Links to this post

THE WINNER OF A COPY OF THE REBEL PRINCESS IS CAROL STRATTON! The book will be mailed to you by her publisher.  If you don't receive it in a reasonable amount of time, please let me know.  All others who would like to try again may go to her blog http://comeoutwhenyourehappy.blogspot.com/ and enter her blog release party contest.  Thanks for all of your entries!
Posted by Jennie at 10:51 AM No comments: Links to this post

WIN A FREE COPY OF THE REBEL PRINCESS

REBEL PRINCESS will be available in bookstores starting next week and is already available on Amazon for e-readers!  I think I mentioned before that this is my daughter, Janice Sperry's first book, a light hearted middle grade chapter book that anyone who ever loved a fairy tale will enjoy.  She's had short stories and articles, even a cute Christmas booklet, published before, but the publication of her first book calls for a celebration, or at least the announcement of a contest by her writer mom. 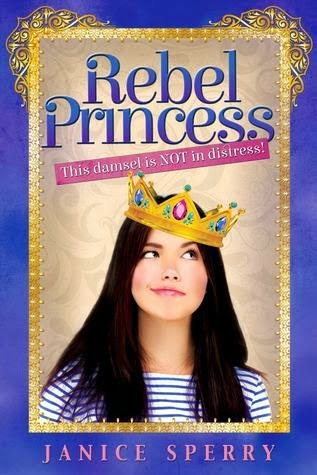 Raven Perilous is not quite like any other storybook princess.  She's the daughter of a gentle princess and an evil sorcerer.  She's not terribly happy that she inherited more of  her mother's genes than her father's.  Her father seems to have gifted her brother with his talents and tendencies while she only got one useless magic power. I mean, what good is the ability to cough up expensive jewelry? To most people she appears to be just another middle school girl, but she spends most of her time being as wicked as possible to avoid being stuck in a tower. (After all, most fairy tale princesses wind up in a tower sooner or later.)  So when Prince Charming shows up at her school, Raven knows she's facing her greatest challenge.


This isn't one of those scientific contests, just an "each entry in the hat" drawing kind of contest.  The contest begins now and runs through midnight Saturday, June 14, 2014. The winner will be announced the following Monday or Tuesday and will be responsible for sending me a mailing address.
Posted by Jennie at 11:30 AM 7 comments: Links to this post

A few days ago I read a blog about whether or not children should be required to share.  It had some good points, but others with which I disagree.  I agree that forced sharing isn't really sharing, but unlimited use of toys or items belonging to a nursery or co-op group fails to teach social manners or contribute in a positive way to helping a child understand ownership.


It reminded me of when my children were small and a couple of friends and I had a discussion on teaching our children to respect other peoples' property.  There had been a rash of ugly graffiti turn up on fences and walls as well as several houses were used for parties while the owners were away.  Bicycles had been stolen from their owners' yards and a teenage neighbor sneaked in our back door and helped himself to a carton of ice cream. (I returned to the kitchen in time to see him running out the back door, leaving a trail of melting chocolate revel behind him.) We didn't want our children to ever be involved in such objectionable behavior. Teaching children concepts of this nature isn't easy, but we decided to give it a try.


We concluded that in order to respect someone else's property, a child has to first experience ownership.  How can anyone respect someone else's ownership if they've never experienced ownership themselves?  We decided our children had to know certain things were their own. The child had to have complete control of those items that belonged to them exclusively such as toys, a favorite cup, or clothing.  That meant it was up to the child, the owner, whether or not to share.


From there we moved on to group ownership.  Some things belong to the family and anyone in the family has a say in who can use those items, when they can use it, and for how long.  Any member of the family can make the rules. Next came toys at the church they all played with in the nursery. I knew my son had caught on to the concept when the nursery leader told me he'd informed another child the toys belonged to Jesus and He was the boss of them and Jesus said everyone could have a turn. I soon learned he wasn't the only one of our children who drew a strong distinction between sharing and taking turns.  Taking turns is what we do with items owned jointly.  Sharing means giving or allowing the use of something that is exclusively yours.


This led  to all kinds of rules around our house.  If a friend came to play, I didn't require my kids to share, but I did have a place where they could put toys they didn't want someone else to play with.  It was their decision whether or not to risk having a beloved toy broken by a careless playmate. They learned to take responsibility for toys left out where children who didn't respect property rights might help themselves to them.  We didn't replace broken or stolen items since we thought their painful loss might reinforce our children's understanding of their rights as owners so they wouldn't do the same to someone else.  We noticed that when they replaced an item themselves with their own small allowances they took very good care of it. We had discussions on good manners and being kind to guests, but it was up to my child to decide which toys he would share and which went onto the high off-limits shelf.  Taking turns with the trucks and dishes my kids decided to share or the group items like the swings was seldom a problem, though my oldest daughter sometimes set the stove timer to help everyone remember when a turn ended.


I don't know if our efforts produced the results we wanted, but none of our children ever seemed to have any problems with taking liberty with other people's property.  They all know what is theirs and what belongs to someone else.  They're also extremely generous, never hesitating to share with others.  Perhaps that group of young mothers I was once a part of stumbled onto a great truth when we decided even small children need to discover ownership and that sharing isn't really sharing unless the person doing the sharing is contributing something he/she truly owns.
Posted by Jennie at 6:47 PM 1 comment: Links to this post