UPDATED VERSION OF AN OLD FAVORITE

Eight years ago I posted a review of Jerry Borrowman's One Last Chance on Meridian Magazine. He has updated the book and republished it as Just One Last Chance. 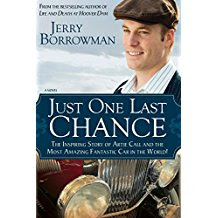 Jerry Borrowman takes a departure from his much loved war era stories to write a different kind of story set in the depression era beginning in 1932. Just One Last Chance is set in Boise, Idaho, at a time when the city was young, few streets were paved, not everyone owned an automobile, unemployment was high, and there were few resources other than churches to offer assistance to the sick or poor. He tells the story of a teenage boy who struggles to grow up without family guidance until he discovers a new kind of family and gains insight into the character traits essential to becoming the kind of man he dreams of becoming.


Artie Call has a knack for getting in trouble. He is a kid who has seen more than his fair share of hurt and loss in his young life. His mother died when he was too young to even remember her clearly. His father turned to the bottle until he was killed in an automobile accident. Then Artie lived with his grandparents, but his grandmother passed away and his grandfather is now suffering from dementia. So Artie takes care of him. Being too young to work, the boy steals enough food to keep them both alive. A prank he and a friend pull on a cranky old man backfires and the boys wind up in court.


Artie's grandfather is sent to a mental institution and Artie winds up living in the home of the man he detests most. Life is hard and his guardian constantly finds excuses to punish him. Two rough boys who helped him steal food earlier show up and insist he assist them in stealing gold coins from a wealthy widow. The robbery goes wrong and the woman is seriously injured. When the other boys flee, Artie refuses to leave the woman. He stays to offer aid and call for help which lands him back in the same judge's court. From here Artie's life takes a different twist.


There are a number of characters in this novel that will touch the hearts of readers, not just Artie, but his two closest friends, as well as Mary and Ray who play strong roles in shaping the kind of man Artie will become. The negative characters are portrayed well also. Even the "bit" characters who play minor roles are distinct individuals and are realistic.


Vintage cars are an important element of the story. Details of the classic Dusseldorf, Cadillac, and Studebaker enhance the background and add authenticity to the time. It was interesting to learn that the Dusseldorf, which was the top luxury car in the thirties cost between $22,000.00 and $29,000.00 which in our time would be over three million dollars. At that time it also cost thirty-five cents for a five course dinner on a cross country train.


In addition to an enjoyable story, Just One Last Chance was a fascinating look at an earlier time. History buffs will love it. My only criticism is that point of view switches are slightly confusing. Nonetheless, I thoroughly recommend this book for book clubs or just to savor alone.


Jerry Borrowman is the author of numerous historical novels and is best known for Three Against Hitler for which he was awarded the National Freedom Foundation At Valley Forge Award. He and his wife live in Utah.

Posted by Jennie at 6:28 PM 4 comments: Links to this post

I review LDS fiction on a regular basis for Meridian Magazine. I haven't been blogging much lately, but I will start posting  links to my reviews.  Here's a link to my latest review column on Meridian Magazine:
http://ldsmag.com/lds-fiction-history-suspense-and-a-touch-of-romance/
Posted by Jennie at 2:04 PM 1 comment: Links to this post