I don't know what it is about book signing pictures that makes them turn out pretty awful, but at least we had fun while this one was being taken on a customer's cell phone. Left to right, me, the customer, Betsy Green, Michele Bell, and Nancy Allen. The three of us were signing our new Christmas book, the Spirit of Christmas, and Nancy joined us at the Orem store. 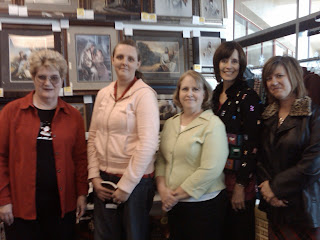 No book signings this past weekend, but I'm gearing up for the two days after Thanksgiving. I'll be headed south the day after Thanksgiving to three different Seagull stores, Provo East Bay from 11-12, Provo 12:30 to 1:30, and Orem North from 2 to 3 p.m. And I won't be alone. Betsy Brannon Green and Michele Bell will be signing with me. The three of us will be signing our new Christmas book The Spirit of Christmas as well as our most recent individual books, that's The Ruby for me. The next day I'll be in Ogden from 11-noon.

Though I didn't visit any book stores this past weekend, it was a hectic busy weekend helping my daughter and her family move into their new home. The movers arrived with their furniture right on schedule and we began unpacking and deciding where things should go. One of the hardest things for me was throwing away the stacks and stacks of packing paper. (The moving company will collect it to receycle) When I was a child I would have been thrilled to have those huge sheets of plain white paper to write or draw on. Money was a scarce commodity for my family back then and paper for kids' artistic pursuits wasn't high on the family priority list. We had to make do with grocery bags, the backs of letters arriving in the mail or school papers that had been graded and returned, and every other piece of paper no longer needed but sporting a few inches of usable space. These past few days have also included a hair cut and an eye exam--one of those things booked months ahead.

Our house seems quiet now, but it won't be for long. Thanksgiving is just two days away and four of our children and their families will be here for dinner. That means lots of cleaning, shopping, cooking and getting ready. My house will be full of noise, laughter, and good smells again. Here's wishing all of you a wonderful holiday filled with family, a yummy dinner, and quiet moments to reflect on your many blessings.
Posted by Jennie at 7:58 PM No comments: Links to this post

The new bookstore called Provident Books in Pleasant Grove, Utah is a new kind of bookstore. It's a combination toy store, candy emporium, and book store. It's a place where readers can find not only the top sellers from the larger LDS publishers, but can find those harder-to-find books from small publishers and self-publishers. See those odd looking things at the top of the picture? They're kind of like skateboards, but with a place to sit. Kids were zipping around the store on them while I was signing books Saturday and having a blast. For more about the new store go to Tristi Pinkston's blog. 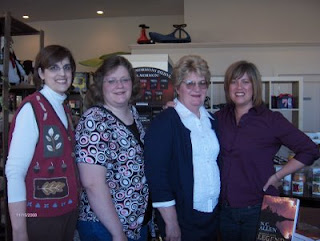 In the picture are Karlene Browning, Asst. Mngr, and I'm flanked by two of my favorite authors, Tristi Pinkston and Nancy Allen. Karlene says future author visits will include invitations to book clubs to sit down with an author, round table discussions, and other more intimate opportunities for authors and readers to interact.

Posted by Jennie at 9:41 AM 3 comments: Links to this post

This blog has nothing to do with politics, the state of the nation, or anything controversial. It doesn't even have anything to do with my cute grandkids or my views on writing. The only bomb shell dropping is the news that there's a fantastic sale going on on E-Bay. Dozens of writers and readers have contributed books, jewelery, editing services, photo sessions, clothes, figurines, and many, many other items to be auctioned off to support the Whitney Awards program. Whitneys you ask? What is that? It's a recognition program designed to award LDS writers for outstanding achievment. Nominations are made by readers. Go here to nominate your favorite LDS novel for an award. You can nominate more than one book, but only nominate a particular book once. It takes five nominations from at least five different people to put an author in the running for an award. Sadly, like everything else the program takes money and this year's sponsors decided to hold an auction to raise funds to run the program. Click on the Whitney icon beside this blog to see what is available and to bid.

A complete set of my Bracelet series is one of the offerings, along with a little bracelet featuring the jewels from the series (not real ones of course). That's four books and so far the highest bid is just $30.00.
Posted by Jennie at 12:23 PM No comments: Links to this post

One of my daughters and her husband are buying a house. They signed the papers just yesterday. It's an exciting time for them, a little scary too in today's economic climate. My daughter has been shopping for blinds and curtains, purchasing tile sealer, talking to the various utilities and doing the thousand and one things buying a new house entails. Rushing to the new house with the newly acquired keys in hand they met a sad sight--a broken window, a stolen garage door opener, and muddy tracks across the carpet.

Thousands of people went door-to-door collecting signatures to put a cause they believe strongly in on the ballot. They made phone calls, they donated money, they formed a huge coalition of many faiths in support of time-tested traditional marriage. The people of the state passed the measure. The losers never really lost anything except the right to push their agenda on innocent school children and to force those who morally oppose homosexual relationships to recognize a lifestyle morally repugnant to them as worthy of God's sanction. With the passage of Prop. 8, gays can still call their relationships anything they want--except marriage--they lose no civil rights, they can still hold jobs, live where they like, designate whoever they wish as their heirs, care for each other in sickness and health, own property jointly, and designate each other as having power of attorney in the event one partner is incapacitated. Still they are holding parades, blocking traffic, egging houses, seeking out activists judges to overrule the will of the majority, and being generally hateful and rude to those who stood strong for their beliefs. Yet they claim they are the ones being disrespected.

In recent years a general disrespect for both public and private property and opinions has grown. Causes have superceded faith in God. Mean-spirited spoilers are everywhere. This year's election campaigns were rife with some of the most vile accusations spilling from the fingertips of bloggers and campaigners hiding their personal agendas behind anonymity. Nearly half of the electorate opposed Barack Obama as President of the United States, yet no one is holding protest parades in objection to his legitimate win. There is a general acceptance that the will of the majority is to be accepted. Many non-supporters have taken a wait and see position, others are quietly accepting the will of the majority, and others are finding positive possibilities in an outcome they didn't choose.

Are we headed into an era where theft and vandalism will rise, even become acceptable? Are we looking at future political campaigns that are longer and meaner? Are we moving toward a climate of intolerance toward religous freedom? Is there still hope and a belief that there is more goodness than evil among us? I choose to believe there are still men and women of integrity who honestly want what is best for our country, who will put our nation and God before their personal desires, and who respect the rights of others.
Posted by Jennie at 9:43 AM No comments: Links to this post 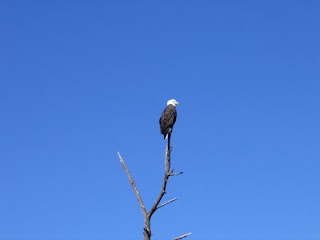 No matter who wins the presidential election tomorrow, there are going to be a lot of disappointed people. The race for President is too close for the winner to claim a mandate which means he is going to start his term with almost half of the nation disliking him or at least discounting his ability. This hasn’t been a pleasant election. It’s been too long and too decisive. The media has taken sides. Sound bytes and political posturing haven’t reliably represented anyone. The polls have been a major annoyance. Blogs have been filled with spiteful meanness. There have been strange reasons for becoming politically involved and a plethora of ridiculous promises the president alone can’t deliver

Change has been the buzz word with little attention paid to what kind of change is being promised and who can deliver it. The President doesn’t have as much power as most people think he does. Congress holds the purse strings and if the economy is where you’re looking for change congressional candidates are the ones that should receive our scrutiny. If the moral fiber is the change you want, you won’t get it with a further slide toward candidates who espouse an “anything goes” philosophy. If you’re concerned about protection from terrorism, then take a good look at every race; if you’re not, then welcome to the head-in-the-sand society. None of the rest of our freedoms will matter if we cease to be a sovereign nation. If you’re just sick of politics and want it all to go away or have no intention of voting, you just might get your wish; the change you’ll get will be a loss of choice.

The challenge will begin as we come to terms with the results of tomorrow’s actions. We can blindly support our new President and whatever changes Congress pushes our way. We can pout and sulk and refuse to acknowledge him. We can shrug our shoulders and go along with whatever our politically activist media tells us is good for us. Or we can get involved; we can let our congressmen, senators, president, governors, commissioners, mayors, and school boards know when they get it right and when they don’t. Our freedom and who we are as a nation doesn't begin and end in Washington, D.C. A republican form of government doesn’t mean we elect representatives, then bow out of the picture until the next campaign rolls around. Our representatives can’t represent us unless we let them know our views. It’s time to stop allowing a few vocal activists, parties, bloggers, newspapers, unions, or other groups to drown out our voices and make our decisions.

Whoever wins the election tomorrow deserves to be given a chance. We have a responsibility to respect the office whether we endorse the occupant or not. Respect doesn’t mean becoming a nation of yes men, but it does mean granting those with whom we disagree the right to express their views, courteous language, and the same consideration we expect to be granted to us. Let’s start by making our voices heard at the polls tomorrow.
Posted by Jennie at 12:03 PM 2 comments: Links to this post