Wow! I can't believe it has been so long since I last blogged. December got a little crazy. There were a lot of Christmas books to read for my Meridian column, my brother and his daughter came to visit for a few days, a couple of doctor appointments (my ulcer decided to act up), grandchildren's programs and recitals to attend, shopping, a couple of book signings, a few dinners and parties, four family birthdays and our wedding anniversary, picking up a grandchild from pre-school, cards to address, a Relief Society lesson to prepare, days serving at the temple, a baptism, etc. etc. Somehow blogging got pushed to the bottom of my "to do" list.

I'll admit I wrote a few blogs in my head, but they're mostly about politics and unprintable. How both major parties could come up with such losers for frontrunners is beyond me--but I promised myself I wouldn't go into that.

The Christmas bustle that swamped December was worth it. I heard from friends from long ago, family I rarely see or hear from, and had a warm and wonderful Christmas Eve with all of my children, their spouses, and the grandchildren present. Our oldest grandson married a lovely young woman a few years ago from another country. Her mother and little brother spent Christmas Eve with us also and have become part of our family since they have no other family in America. Of course there was plenty of good food and presents galore. There was plenty of noise and confusion too, but it was wonderful to all gather together. I also received a sweet note from a young woman who used to spend Christmas Eve with us when she was a little girl.

When the grandchildren were small we started a tradition of taking a picture on the staircase of them all in their new Christmas pajamas. They all still love having the picture taken, but most no longer change to pajamas nor do they smile for the camera.  Instead I think they try to outdo each other to see who can be the silliest. My pictures didn't turn out great this year, but I'll attach a few anyway.

I'll also close this blog with a wish for a healthy, happy, safe New Year for all of you. 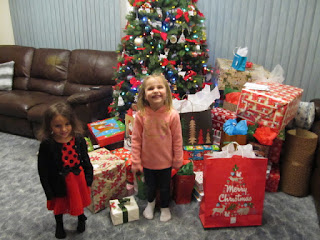 Before the unwrapping began. 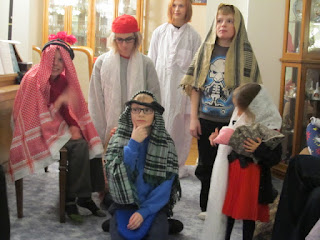 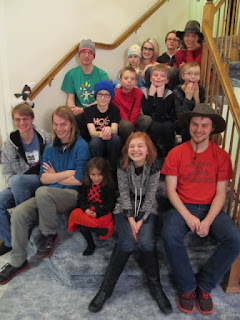 A whole lot of silliness.
Posted by Jennie at 2:21 PM No comments: Links to this post