Book Contests Coming Up in August

You may have noticed a new gadget on the sidebar of my blog.  It's an invitation to join LDS Publisher's Summer Book Trek.  It links to an explanation of the rules for the contest, which are easy.  Just sign up, post a list of the books you plan to read in August (you can add and delete all you want) read books, and report what you read.  You get extra points if you read any of the sponsors' books.  And hey!  I'm one of the sponsors.  Prizes are the books listed by the sponsors.  Go for it!

I'm considering linking to another book contest on August 18.  The Heirs of Southbridge will also be one of the possible prizes for winners of that contest.  I'll let you know more about it later.  Then in September I plan to go back to my usual Wish List contest.

The rest of this blog has nothing to do with contests and is sheer indulgance on my part. My lilies were gorgeous this year and I just want to show off some of the pictures I took of them. 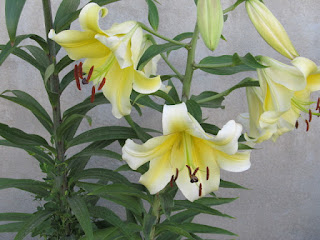 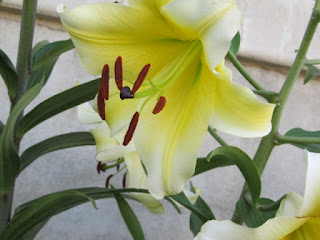 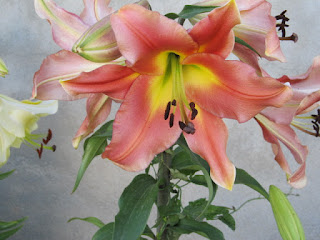 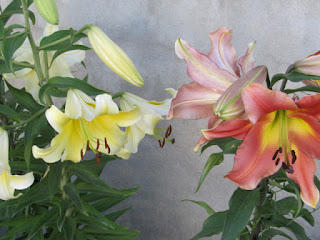 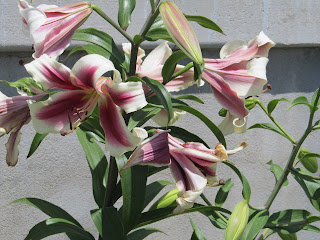 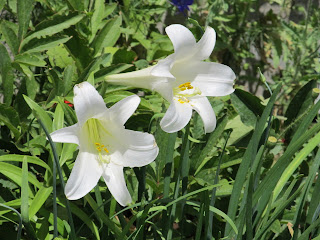 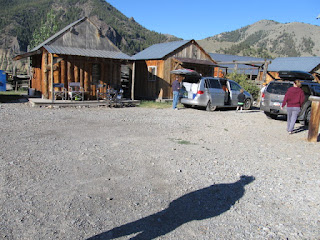 We're back from a five day family reunion vacation at the May Ranch south of Challis, Idaho.  It's along the Middle Fork of the Salmon River and is a fun place for a large group to gather.  There were only about thirty-five of us since this seemed to be our family's year for complications that kept most of the family from attending.  We weren't sure we'd be able to go because of my health problems, but I was okay until the last day when I was nauseated and cramping all the way home.  It seems that's how life works; we make plans, then life adjusts them. 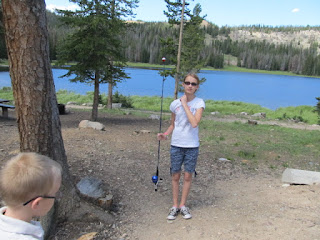 A son-in-law and I did some fishing and we took some of the kids fishing.  Rich and I mostly catch and release since we neither one like to eat fish, but I caught one trout that swallowed the hook too far so I had to keep it. We don't throw dead fish back in the water or leave them lying around to rot, so we decided we'd better clean it, take it back to the ranch, and see if someone wanted to eat it.  Rich laid it out on a rock while he went back to the truck for a knife.  He turned back around just in time to see an eagle take off with the fish. Problem solved.

Another son-in-law is an avid photographer.  He kept watching an eagle nest in a tree not far from the ranch house and one evening an eagle chick landed on a nearby tree where we were all able to watch it and get close up views with binoculars.  Steve and the owners' son jumped in a truck and headed to another point to take pictures.  When they got close they were able to see that not only was the chick in the tree, but down farther hidden to us at the ranch by foliage, was one of the parent eagles.  He got some great pictures which I hope he'll post when they get back (they went on to Yellowstone for a few days.)

We not only found watching the eagles soar above the ranch a great sight, but we saw an elk herd, lots of deer, egrets, and some of our group (not me) saw mountain sheep.  Of course there was an abundance of squirrels in various sizes and varieties as well as meadows full of geese with their little ones. 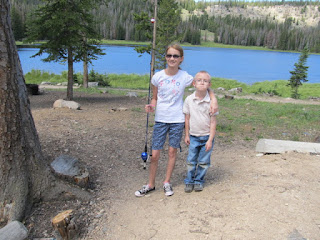 One day we went to a little ghost town up Yankee Fork that has been converted to a museum so the kids could pan for gold.  They each found a fleck or two.  There's a big gold dredge near there that in its heyday really churned up the creek bed.  Another day we drove up a horrendous narrow road to Bayhorse Lake.  It's beautiful, but I don't think we'll do that again.  Narrow trails hugging shale slopes aren't my thing.

The highlight for the kids was the huge waterslide at the ranch.  They spent hours shooting down it.  I think their next favorite activity was catching minnows and water skippers.  One niece collected 17 minnows in a metal box, then carefully turned them all back into the stream before she left.  I think the adults' favorite activity was eating.  We did a lot of that and it was all great.

I usually take a lot of pictures when we travel anywhere, but I didn't take many this time.  Between forgetting to take my camera with me most of the time and not feeling completely well, I left most of the picture taking to Janice and Steve.  Maybe they'll let me borrow their pictures.
Posted by Jennie at 12:14 PM 1 comment:

I have a speaking engagement tonight and I'm leaving on vacation tomorrow, so naturally instead of thinking about my talk or packing, I've been wasting time on Face Book. I did a candy survey to see how many kinds of candy out of a choice of 100 different kinds I've tried.  I got a score of 75.  Obviously I have a sweet tooth. I learned all kinds of interesting tidbits; I just can't remember any of them right now.  I saw a cute picture of my granddaughter, Gracie, checked out the wedding decorations my young friend Kristie did for a recent wedding, and saw the bruises on a great nephew's leg where he got zapped by an electrical accident.  My phone and my Kindle are both plugged into their chargers so I guess I'm getting ready in a way.

Stalling is probably the word for what I'm doing; you see I'm a bit nervous about tonight.  Speaking doesn't usually worry me too much if I'm talking to book people; we share a common language and love.  Tonight's talk has nothing to do with reading or writing. I've been asked to talk on a subject I dearly love, but have a difficult time expressing my feelings about because it touches my emotions so strongly.  You see, I've been asked to talk about temples and temple service.  I've served in the temple for four years now and since I'm basically a storyteller, there are plenty of stories I'd love to share; unfortunately most are too sacred to speak of outside the Lord's House.  It's a difficult task for me to speak on a topic that touches my emotions, one where I have to be careful not to overstep what is appropriate, and one where I want so much for my audience to share the deep love and reverence I feel for these beautiful places.

I'm both excited and nervous about our vacation/reunion.  I've had some serious health problems the past couple of months (pancreatitis) and when I talked to my doctor about going on this trip he said, "You'll be fine as long as you're within a couple of hours of a hospital emergency room, should you have another attack."  I didn't find that comment too encouraging, especially as we'll be at a ranch along the Salmon River where ambulance service means a helicopter.  There will be three RNs and two paramedics in our group, so I'm not really worried.  Besides I've felt much better the past few days. Still it niggles at the back of my mind and I'm giving running the river a pass this time around.   My husband thinks I should skip fishing too, but I can't do that!  He's not a fisherman and the only time I get to fish is when I'm with my son-in-law, Rich.

I suppose I really should get off the computer, take a shower, and decide what to wear.  I should look over my notes one more time as well.  I'm afraid there's a little bit of Scarlet O'Hara in me when it comes to this talk; I'd rather think about it later.  The funny thing is once I start talking it will be hard to stay within my allotted time and when it's over I'll be glad I did it.  Go figure.
Posted by Jennie at 3:08 PM 3 comments: 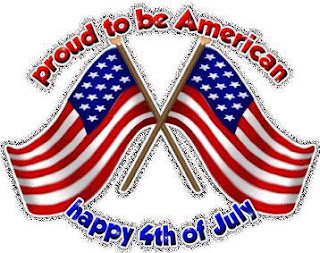 It used to be that the most common warnings concerning the Fourth of July dealt with drinking and driving.  I still remember the popular jingle from my teenage years, If you go forth with a fifth on the Fourth, you might not go forth on the fifth."  This year is different.  This year it's "Don't be stupid; skip the fireworks and target shooting."  They're both good advice.  I certainly hope we don't have any drunks or anyone else who is a bit careless setting off fireworks to celebrate the holiday.

I enjoyed fireworks when I was a kid.  The city fathers put on a grand display every Fourth and people came from miles around to watch.  In recent years they've become so common place, it's hard to get excited about them as they commemorate everything from ball games to concerts and the neighborhood kids set them off just because they can. Last year they became a public nuisance as they burst in all their noisy, screeching brilliance for a whole month.  So far this year has been quieter for which I'm grateful. I'm not opposed to a well run fireworks display with safeguards in place, but I would prefer fireworks weren't set off in neighborhoods or near the dry fields and mountainsides.  I can do without the noise and even more important, we can all do without any more wild fires.

The Fourth isn't just about fireworks.  It's a day to fly the flag, remember those who made our country possible, those who gave their lives for it, and those who sacrificed years of their lives and long separations from their loved ones to ensure that our liberty continue.  It's a salute to the many Americans who make their way to the ballot box every election, those who interrupt their lives to serve on juries, those who kneel to thank God for this land, and to the everyday Americans who pay taxes, support those in need, and all those who value liberty.  This year too, it's a day to thank the fire fighters who are giving so much to save homes and lives.


And let's not forget the Fourth is a traditional day for families to get together, break out the grill and the potato salad, eat ice cream, and strengthen family ties.  There are parades to watch, concerts, and patriotic speeches.  It's a birthday!  We should enjoy it, but with this year's super dry conditions, let's use some common sense too.
Posted by Jennie at 9:46 PM 1 comment: