Stories of Scrooges, angels, and miracles abound at Christmastime. Tales of a Grinch who sees the error of his way and makes a complete about face are plentiful too. But it’s the little moments of compassion that touch me the most.A few years ago I was working at the desk of a major library when a young man came to the desk with a book he was desperate to check out for a class he was taking at the University. Unfortunately he had fines on his card that had exceeded the limit I could override and allow him to take the book. He had no money and we were at a standstill. A stranger waiting in line stepped up and paid the fine. “I try to do one good deed for a stranger every Christmas season,” she said, brushing off the young man’s thanks. I love that concept. What a wonderful Christmas it would be if we all did just one kind thing for a stranger this holiday season. To read more on this topic click here.

For me each Christmas season includes a lot of book signings and the opportunity to meet old friends and new who are shopping for books to give for Christmas. This Saturday, December 6, I'll be at the Redwood Seagull Book Store (1700 South) at 11 a.m, then at the West Jordan Seagull Book at one o'clock. The West Jordan store has some fun things planned including giving customers copies of favorite Christmas recipes, including one from me. Michele Bell, one of the co-authors of The Spirit of Christmas will be signing with me at both stores. Come on in and say hello.

Along with putting up our tree, decorating the house, and doing a ton of Christmas shopping this past week, I managed to get new glasses. 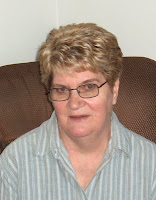 They're smaller than my old ones and take some adjusting.
Posted by Jennie at 6:04 PM